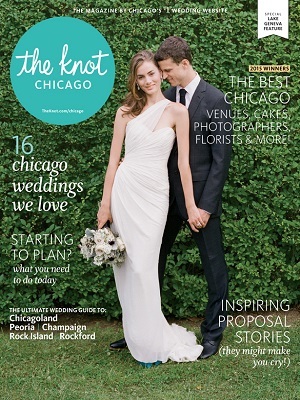 A Lee County prosecutor and a DuPage County school teacher have sued a Chicago area bridal magazine, saying the publication wrongly published an advertisement featuring a photo that included them and the teacher’s young son without their consent.

On Aug. 10, Christina Malecki, who works as an assistant state’s attorney in Dixon for Lee County in north central Illinois, and Jaclyn Halley, who in the complaint identifies herself as a public school teacher, filed suit in Cook County Circuit Court against WeddingPages LLC, publishers of “The Knot Chicago” magazine, asking a judge to order The Knot to pull from its racks and stop distributing the magazine containing the image they said invades their privacy and threatens them with “potential danger” and “embarrassment,” among other allegations.

According to the website for Community Unit School District 201, Halley is employed at an elementary school in Westmont.

According to the complaint, Halley, Malecki and Halley’s 9-year-old son, identified in the complaint as J.J.H., assert their images and likenesses were included in a photograph featured in an advertisement run on page 347 of The Knot Chicago’s “Spring/Summer 2015” edition. The advertisement was allegedly for “The Trolley Car & Bus Company.”

The complaint does not specify any familial or other connection between Halley and Malecki, other than both being included in the photo that prompted the lawsuit.

The Knot is published by Omaha, Neb.-based WeddingPages, and is marketed to those planning weddings. The magazine features content designed to help people plan weddings. Vendors of wedding-related goods and services, such as florists, photographers, caterers and bus and limousine operators, advertise in The Knot.

According to the complaint, the photo used in the Spring/Summer Page 347 Trolley Car & Bus advertisement was used without any written or verbal permission granted to the Trolley company, The Knot or WeddingPages from Halley or Malecki.

The plaintiffs contend the commercial use of the photo which includes their images violates their rights under the Illinois Right of Publicity Act.

They are seeking a temporary restraining order and an injunction preventing WeddingPages from further distributing the magazine that includes the advertisement or photo. They are also seeking unspecified damages.

The plaintiffs are represented in the action by attorney Michael J. Cronin, of Chicago.