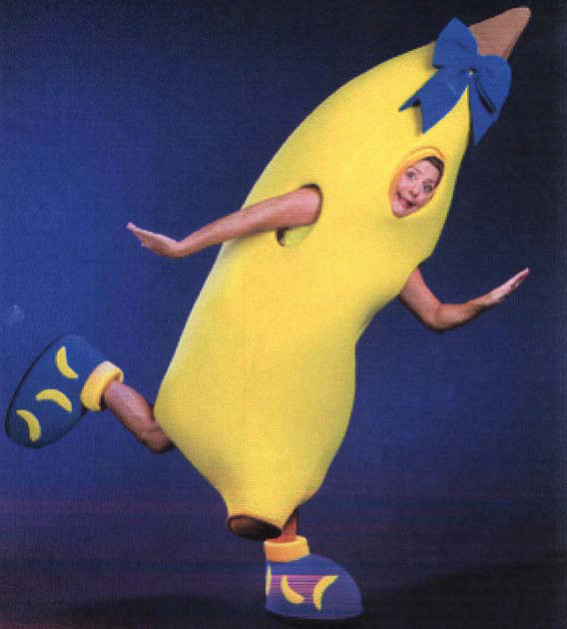 According to a federal appeals panel in Chicago, if you dance around in a giant banana costume at a public event, you cannot restrict people from posting pictures of you doing so under the auspices of copyright infringement.

The Seventh Circuit Court of Appeals made the ruling Monday in the matter of performer Catherine Conrad, who sued AM Community Credit Union and others in Wisconsin's federal court for what she alleged was a violation of her intellectual property rights.

Conrad, a self-employed entertainer who calls herself “The Banana Lady” and dresses in a giant costume resembling the potassium-rich fruit, booked several gigs performing singing telegrams for a variety of credit unions at public events, the opinion notes.

The ruling, which affirmed the decision of a federal judge in Wisconsin that Conrad's suit lacked merit, included a photograph of Conrad in her costume and a link to a YouTube video of her performing the "Banana Shake."

Judge Richard A. Posner wrote the opinion for the panel, which was rounded out by Michael Kanne and John Daniel Tinder.

“Conrad alleges ... that she told the arrangers … that members of the audience were not to take photos or videos of her performance except for their ‘personal use,’ which she believes, somewhat implausibly, excludes posting any of the photos on the photo taker’s Facebook page," Posner wrote.

According to documents Conrad filed to the federal appeals panel, she "spent 25 years developing and perfecting" her "Banana Lady" character, which she created to "inspire kids to honor their own unique talents and go for their dreams."

Stressing that her character is a federally trademarked name and book series, Conrad argued in her appeal that the defendants hired the trademarked "Banana Lady" brand, "not somebody in a banana suit."

The panel, however, questioned the validity of the trademark and noted that many of Conrad's claims were invalidated by an earlier suit she lost over alleged infringements.

“[Conrad] has also registered a copyright on the costume itself, but there is doubt (not necessary for us to resolve) about the validity of that copyright because banana costumes quite similar to hers are, we are surprised to discover, a common consumer product,” Posner wrote.

If Conrad did indeed hold a valid copyright on the costume design and her performance in it, the credit unions she has filed suit against could be possibly be found to be in violation, Posner wrote, adding, however, that Conrad did not invoke the proper copyright laws in her filings.

“We cannot end this opinion without remarking [on Conrad’s] abuse of the legal process by incessant filing of frivolous lawsuits,” Posner wrote for the panel.

“This is at least the eighth case she’s filed in federal court since 2009, and she has filed at least nine cases in state court just since 2011. She appears not to have won any judgments, but she did obtain settlements in the first three federal suits that she filed.”

The panel's opinion goes on to detail a suit Conrad filed over event organizers mailing postcards to persons with her picture on it and another 15-month-long case dealing with a videotaping of her performance for which she demanded a $40,000 license fee. The defendants obtained summary judgment in that case.

Posner also mentioned lawsuits Conrad filed against her former lawyers and a web hosting company that took her website down after she failed to pay. In addition, he pointed to unpaid sanctions and fees Conrad owes in the wake of her litigation, to the tune of as much as $95,000.

“Despite all this and the fact that she hasn’t complied in full (or, so far as we are aware, in part—she is in desperate financial circumstances) with the financial obligations that the courts have imposed on her, the federal district court for the Western District of Wisconsin has continued to allow her to file suits in forma pauperis,” Posner wrote.

On behalf of the panel, Posner suggested that the Wisconsin court "should consider enjoining her from filing further suits until she pays her litigation debts.”

The above photo of Conrad performing in her costume was included in the panel's  opinion, which notes it was part of the court record.