Woman sues Archdiocese, others over fall at St. Casimir Cemetery 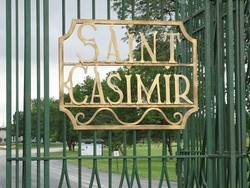 A Kane County woman is suing over claims she sustained injuries after tripping on a concrete marker in a Chicago cemetery.

According to the suit, Husarik tripped and fell on a raised and grass covered concrete marker in the defendants' cemetery at 4401 W. 111th St. in Chicago. She claims the defendant failed to maintain the cemetery, which resulted in her fall.

Husarik is seeking damages in excess of $50,000 and court costs. She is being represented in the case by Lombard attorney Steven H. Mevorah of Mevorah Law Offices LLC.

This is a report on a civil lawsuit filed at the Cook County Courthouse. The details in this report come from an original complaint filed by a plaintiff. Please note, a complaint represents an accusation by a private individual, not the government. It is not an indication of guilt, and it only represents one side of the story.