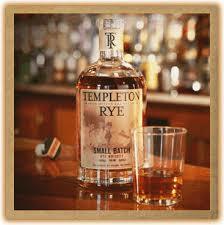 A dispute over the true birthplace of an Iowa whiskey brand could move to federal court, even as the truth about where that brand is actually produced has rye connoisseurs doing a spit-take.

Plaintiff Christopher McNair originally sued Templeton Rye Spirits, makers of Templeton Rye whiskey, in Cook County Circuit Court, claiming deceptive marketing practices for a shocking revelation: The whiskey, named for the “small Iowa town” in which the company claimed it was made, is actually distilled and aged in Indiana.

McNair seeks certification of a class in the lawsuit and an award for the monetary, actual, consequential, and compensatory damages to class members who purchased Templeton Rye Whiskey, with interest, attorneys fees, and any other relief that may be appropriate.

McNair argues that customers buying a bottle of Templeton Rye wanted a local, “craft” whiskey, a fact Templeton touted in its marketing practices.

“Templeton Rye is marketed as the revival of a Prohibition-era whiskey recipe that was the favorite drink of Chicago mobster Al Capone,” McNair’s original suit states.

It adds, “Since its rebirth within the past decade, [Templeton] has marketed the Templeton Rye as being ‘small batch’ and ‘made in Iowa.’ Consumers, seeking an alternative to mainstream, mass-produced alcoholic beverages have purchased hundreds of thousands of bottles of Defendant’s Templeton Rye and have paid a premium price over other whiskeys to obtain those qualities.”

The whiskey, however, is actually distilled and aged at MGP Ingredients Inc., an Indiana distillery that serves other clients as well, McNair argues, citing a statement that ran in an Iowa newspaper Aug. 28 from Templeton’s chairman, Vern Underwood, saying: “It’s very simply put: We buy the whiskey in barrels from [MGP].”

McNair cites Underwood further stating that the whiskey is distilled, aged, and barreled at the Indiana facility before it is brought to the Iowa facility, where it is bottled. The bottling is the only part of the process that occurs at the Iowa facility, McNair states.

McNair argues that without the distinction of coming from a small Iowa town of 362 residents – supposedly the location that produced whiskey good enough for Al Capone to order it by the barrel – the brand would not be as successful.

“It follows then, that [Templeton] crafted its marketing plan to influence of consumers to purchase its product by representing that Templeton Rye originates from Templeton, Iowa, and is produced in a manner substantially different from large alcohol conglomerates,” McNair’s suit states.

The marketers were not subtle about the connection, either, McNair argues: The company sold T-shirts with “Templeton Rye: Made in Iowa” on them, and tweeted statements like “Greetings from Templeton, Iowa, home of The Good Stuff.”

McNair’s original suit sought a class action and alleged counts of consumer fraud, as well as consumer fraud under specific Illinois and Iowa laws, fraud by omission and unjust enrichment.

Templeton argues the suit meets criteria for removal to federal court under the Class Action Fairness Act, citing the large number of allegedly-not-Iowan bottles of whiskey at the center of McNair’s allegations, and their total worth.

“[A company record keeper] states that Templeton has sold approximately 1,473,000 bottles of Templeton Rye whiskey over the past five years, according to company records,” the removal notice states. “At approximately $34 per bottle as alleged by [McNair], the amount in controversy in this matter easily exceeds $5 million.”