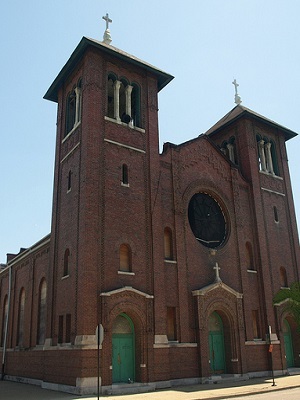 One of the real estate groups behind the plan to build new luxury apartments on the site of a demolished 110-year old Roman Catholic Church not far from where the Cabrini-Green Public Housing Projects once stood has landed in court under a lawsuit brought by a purported business partner who claims his former associates cheated him out of commissions and fees from the sale of the church after he had given them the inside track to buying the site from the Archdiocese of Chicago.

On Oct. 27, Thomas J. Tully Jr., through his company TJ Tully LLC, filed suit in Cook County Circuit Court against Sean Conlon and Benjamin “Benjie” Burford, the men at the top of Chicago real estate company, Conlon & Co., alleging they, through a corporate entity identified in the complaint as Conford Investments LLC, “breached every conceivable fiduciary duty” to Tully in essentially cutting him out of the deal Tully asserts he brokered.

The complaint stems from the ongoing effort to redevelop the site of the former St. Dominic’s Church at Sedgwick and Locust streets on Chicago’s Near North Side.

Developers Belgravia Group are building a new 45-unit condominium building on the site of the church, which was demolished earlier this year. The church had been vacant since the Archdiocese closed it in 1990.

The development was fostered by the Conlon company, which facilitated the acquisition of the land from the Archdiocese.

However, in his complaint, Tully said Conlon’s role in the deal only came about through his work for which he has yet to be paid.

According to the complaint, Tully first approached Conlon, for whom he worked at the time as a broker, concerning the old church building, saying he believed he could tap personal contacts within the Archdiocese to facilitate the sale of the church building, which had yet been publicly listed for sale. The complaint said Conlon agreed, saying if Tully could land the property, Conlon could “tap buckets of capital” to redevelop the site.

Tully and Conlon then entered into a joint partnership, known as 873 Sedgwick LLC, to handle the purchase of the property. Tully then approached the Archdiocese, and his efforts resulted in an agreement to sell the site for $2.1 million in the fall of 2013, the complaint said.

In 2014, however, Tully’s complaint alleged Conlon and Burford, who serves as CEO of Conlon’s Chicago company, and who Tully describes in his complaint as Conlon’s “lackey,” began working to alter the arrangement, inserting “a one-sided and never-agreed upon LLC operating agreement into the partnership,” allowing Burford to serve as manager and resolve disagreements in Conlon’s favor.

By the summer of 2014, Tully said “it became clear … Conlon intended to flip the church property from the outset,” rather than develop it himself, as Tully had understood the arrangement.

By the fall, Tully said the relationship had become “contentious,” with Conlon and Burford refusing to provide him with documents pertaining to the purchase and development of the site, and Conlon complaining to Tully that city officials were pressing for “affordable housing” as part of any redevelopment of the site. Yet, Tully said Conlon claimed to have found a third-party buyer willing to take on the project, who he identified as “Messner,” according to the complaint. Tully said Conlon told him “Messner” would pay them enough to generate a $100,000 profit for the 873 Sedgwick partnership.

“Tully believes Messner was a fictional buyer designed to defraud Tully, whereby defendants (Conlon and Burford) would then sweep commissions and other hidden fees out of a higher scale,” the complaint said.

Within weeks, Tully said Burford produced a letter from Belgravia regarding their intentions to purchase the property for $2.6 million.

In the months since, Tully said Conlon’s group has refused to pay Tully what he believes he is owed, and has instead paid companies and others associated with Conlon to provide services “not in the interests of the (873 Sedgwick) LLC but solely to benefit the defendants and harm Tully.”

He claimed, for instance, while paying Conlon’s associated companies more than $157,000 from the 873 LLC, the defendants “failed to obtain upzoning (as they had promised Tully) that would have increased 873’s return. They also failed to obtain a parcel adjacent to the church as they had promised. They nonetheless paid themselves generous commissions and other fees and expenses without any approval or authority.”

Tully has asked the court for an injunction preventing Conlon from exercising any further control over the 873 Sedgwick LLC, and ordering an accounting of the LLC’s books.

He has also requested compensatory damages and punitive damages at least three times any amount awarded to him in compensation.

Tully is represented in the matter by attorney John J. Tully, of the firm of Thomas M. Tully & Associates, of Chicago.