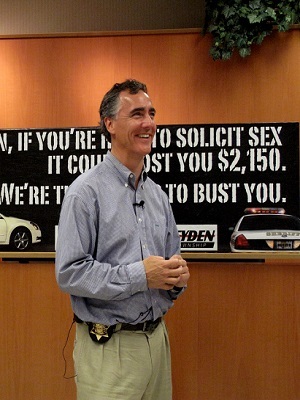 A federal appeals panel handed Cook County Sheriff Tom Dart a stinging defeat, saying the county’s chief law enforcement officer had trampled the free speech rights of the owners of the country’s second-largest provider of online classified advertising space when he and his office moved to stem funding to and potentially put the site out of business over concerns the site was used to facilitate prostitution and sex trafficking.

And the panel criticized a lower court judge who had found nothing wrong with Dart's actions, saying the judge had stumbled upon a "foolproof" way of allowing law enforcement to escape any consequences for abusing First Amendment rights.

On Nov. 30, the Seventh Circuit Court of Appeals sided with the owners of Dallas-based Backpage.com, who had argued Dart’s actions violated their First Amendment rights.

Dart, who could not convince Backpage to shut down the elicit section voluntarily, had sent letters to companies that did business with the site, such as Visa and MasterCard, and demanded they sever their relationship with Backpage or risk potential enforcement actions themselves.

Seventh Circuit judges Richard A. Posner, Diane S. Sykes and Kenneth F. Ripple had heard arguments on Nov. 13 on the appeal of the decision of U.S. District Judge John J. Tharp Jr., who had declared the sheriff was within his rights to take on Backpage in such a manner.

In the Nov. 30 appellate ruling, the judges took issue with Dart's defense, writing: “The sheriff ripostes that he’s not using his office to organize a boycott of Backpage by threatening legal sanctions, but merely expressing his disgust with Backpage’s sex-related ads and the illegal activities that they facilitate. That’s not true, and while he has a First Amendment right to express his views about Backpage, a public official who tries to shut down an avenue of expression of ideas and opinions through ‘actual or threatened imposition of government power or sanction’ is violating the First Amendment.”

“The suit against Craigslist having failed, the sheriff decided to proceed against Backpage not by litigation but instead by suffocation, depriving the company of ad revenues by scaring off its payments-service providers” the judges wrote. “The analogy is to killing a person by cutting off his oxygen supply rather than by shooting him.”

The judges noted confusion with Tharp’s ruling, in that his written opinion “contains

Tharp seemed to surmise the companies ceased doing business with Backpage of their own volition, and that Dart’s role, if any, was to advise them of the content of some of the ads their payment services allowed.

Since Backpage is a plaintiff, its only remedy lay in seeking an injunction, the appellate judges noted. In remanding the case to Tharp’s courtroom, the appeals court included in their decision the precise language Tharp should use to issue that injunction against Dart.

The appeals court had issued a temporary injunction against the sheriff on Nov. 16.