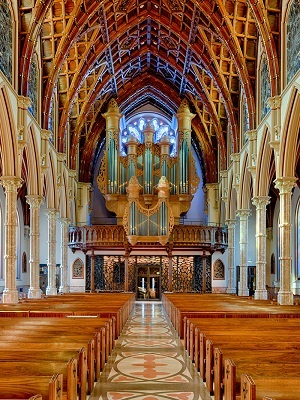 A gay man who claims he was fired as music director at a northwest suburban Catholic church after publicly announcing his engagement has asked a federal court to order the Chicago Archdiocese to give him his job back, asserting federal, state and Cook County non-discrimination laws and past employment decisions by the Archdiocese trump the Roman Catholic Church’s prerogative under the so-called “ministerial exception” to fire church workers whose same-sex marriages may violate the Catholic church’s stated beliefs on marriage.

John Colin Collette, of Chicago, filed his complaint on March 7 in Chicago federal court against the Archdiocese and Holy Family Parish, the church at which he had worked for 17 years, in Inverness. The three-count complaint levels alleged the Archdiocese and the Inverness church had violated the federal Civil Rights Act, the Illinois Human Rights Act and the Cook County Human Rights Ordinance in firing Collette in 2014.

The lawsuit arrived in court about 15 months since Collette filed a discrimination complaint with the federal Equal Employment Opportunity Commission in December 2014 against the local Catholic Church organizations. Collette’s federal lawsuit asserted he received clearance from the EEOC to bring his legal action in federal court.

According to the complaint, Collette had been employed at the Inverness church since the late 1990s, holding the titles of Director of Worship and Director of Music. Despite those titles, Collette asserted he “was not responsible for planning the liturgy or selecting the music played during masses and services” at the church. Those duties, instead, fell to different committees made up of parishioners, who made recommendations for mass and other church services to the church’s pastor, identified in the compliant as The Rev. Terence Keehan.

The complaint filed in federal court doesn’t state whether Keehan or anyone else in leadership at the church or the Archdiocese knew Collette was gay or was romantically involved with a same-sex partner. However, in reports published at the time of the EEOC filing, Collette asserted clergy and other church officials had long known he was gay.

Collette asserted, throughout his time at the church, he “was meeting all legitimate job expectations when he was terminated.

However, in mid-2014, he announced on social media his engagement to his long-time partner. Shortly after, Collette said church officials requested his resignation and, when he refused to resign, he was fired, “the result of his entering into a ‘non-sacramental marriage,’” according to emails from the Archdiocese and then-Cardinal Francis George, which Collette cited in his federal court complaint.

A posting in a Holy Family church bulletin in October 2014, purportedly from Cardinal George, reasserted Collette “had been terminated due to his ‘participation in a form of union that cannot be recognized as sacrament by the Church.”

In his complaint, Collette assailed this contention, arguing the Catholic Church “employ many heterosexuals that have entered ‘non-sacramental’ marriages that were not sanctioned by the Catholic Church,” as well as “gays and lesbian employees who have not married same-sex partners.”

Those employment decisions, he said, mean the church violated the non-discrimination laws, and should not be excluded from their provisions.

While the complaint does not reference the ministerial exception, it may prove central to defenses ultimately raised by the Archdiocese. In 2012, in the case known as Hosanna-Tabor Evangelical Lutheran Church and School vs EEOC, a unanimous U.S. Supreme Court rejected the EEOC’s contentions that the Constitution’s guarantee of freedom of religious practice limit the reach of federal and state discrimination laws, as churches and other religious organizations are permitted to choose their own “religious leaders,” using beliefs and teachings as criteria. Further, the Supreme Court said the exception was not limited only to clergy, as the fired employee at the heart of the case had served as a teacher at the private Lutheran school.

In his complaint, Collette has asked the court to order the Archdiocese to restore him to his previous position, and award him back pay and front pay, as well as unspecified compensatory and punitive damages, and attorney fees.

He is represented by attorneys Kristina B. Regal, Kerry Lavelle and Joseph V. Vito, of Lavelle Law, of Palatine.