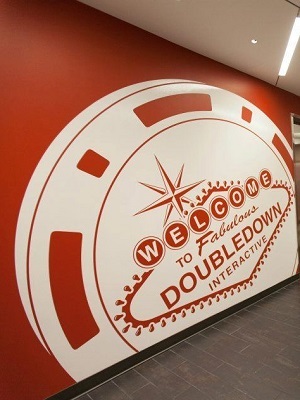 An old gambling maxim declares that the house always wins. But, in dismissing a proposed class action against an online casino game provider, a federal judge in Chicago said, unless “the house” runs the risk of allowing contestants to win some actual coin, the games it hosts can’t be considered gambling.

Judge Edmond E. Chang issued an opinion March 25 dismissing the complaint of Margo Phillips against Double Down Interactive. Phillips alleged the company’s online games violated Illinois gambling law, sought to force the company to stop running the games and to recover money she paid the online casino. Double Down successfully removed the case to federal court, then moved to dismiss all counts.

According to Double Down, from Jan. 1, 2013, to March 31, 2015, nearly 18,000 people from Illinois accessed the casino site directly, or through Facebook or its mobile app, or bought at least $50 worth of gaming credits using a device with an Illinois Internet protocol address. In 2014 the company reported more than $240 million in revenue.

The site lets players use virtual “chips” to play online versions of slot machines and roulette tables as well as poker and blackjack. First-time players get a million free chips; returning players get some free chips each day. The only thing players can win is more chips. Players who run out of free chips may buy more, such as 150,000 chips for $3, 1 million chips for $8 or as many as 100 million chips for $99. Prices vary depending on the user’s platform. While some players sell chips to other players on an external “black market,” the company’s terms of use specifically prohibit that practice.

Phillips played Double Down games through Facebook from January 2013 through April 2015, wagering and losing more than $1,000 in chips, including the entirety of 35 million chips she bought for $59 on March 7, 2015. While she argued that means she gambled and lost to another party, Doubled Down argued Internet games are exempt from the state statute governing gambling devices, and further that its virtual chips are not “things of value” in a wagering context.

Chang, invoking “the beloved Sesame Street game, ‘One of These Things Is Not Like the

Others,’ ” rejected Double Down’s arguments that its online games are materially different from the real-world casino standards. “Although it is true that the Internet is not a tangible device in the exact same way that a stand-alone slot machine is, the Internet is also not some amorphous thing, and Double Down’s app can qualify as a ‘device’ used for gambling.”

However, he agreed with Double Down that its games do not, as the Illinois Loss Recovery Act defines, have a “loser” or “winner.” The operator has no stake in the outcome of the actual games — once a player buys chips, Double Down cannot lose that money back to the player. The only risk is that a player might choose not to buy more chips if their virtual winnings are sufficient.

“Double Down still never puts any of its own money at risk in the online games,” Chang wrote, “and risking potential future sales is not the same thing.”

The failure to sufficiently argue that what Double Down offers is gambling under state statute ultimately undercut all of Phillips’ arguments. As she already amended her initial complaint and did not propose other amendments, Chang dismissed the entire complaint with prejudice.

Phillips was represented in the action by the firm of Edelson P.C., of Chicago.

Double Down was defended by the firm of Novack and Macey, of Chicago.