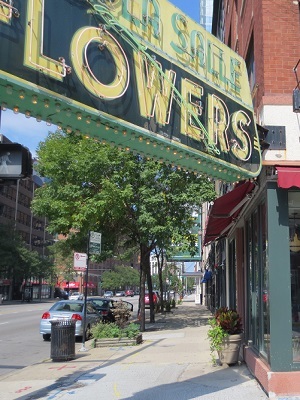 Editor's Note: This is the second installment in a three-part series examining the recent rise in ADA Title III accessibility lawsuits in the Chicago area. The first installment discussed the growing trend. The final installment will take a look at  the impact of the lawsuits on businesses and organizations.

Earlier in the year, Margie Milovich’s neighbor had been hit with a lawsuit under the Americans with Disabilities Act. But she said it still didn’t prepare her for the moment the same plaintiff delivered a similar lawsuit to the door of LaSalle Flowers, a family-owned River North flower shop at 731 N. LaSalle, dating back to the 1930s.

“It was a complete shock,” said Milovich, who has managed the flower shop for 21 years. “No one has ever had an issue purchasing flowers here.”

The flower shop is located around the corner from Fabcakes, a breakfast and coffee shop that was sued earlier in the year by the same party, Chicago resident Mary Mizerk and her attorney, John L. Steele, of the Accessibility Law Group and formerly of the firm of Steele Hansmeier PLLC, which, like the firm of Prenda Law, has been accused of improper activities when pursuing quick settlements from those accused of illegally downloading internet pornography.

The suit alleged that Mizerk, who has osteoarthritis and uses a wheelchair, could not enter the flower shop on her own because the doorway was about 5 inches higher than the sidewalk.

The civil suit, brought under Title III of the ADA, was one of several filed by Mizerk and Steele against businesses within several blocks of each other in Chicago’s River North neighborhood.

And that fact was not lost on Milovich.

“This lawyer is targeting mom-and-pop places,” she said of Steele. “There have been 14 lawsuits [nearby] … 14 of our local shops. He’s not going after the big people, [he’s targeting] small restaurants, small salons, small neighborhood pubs.”

Many businesses and defense attorneys find issue with such “serial” or “drive-by” filings, particularly because they stem from a handful of plaintiffs and lawyers.

Of the 94 ADA Title III lawsuits filed in 2015 in the U.S. District Court for the Northern District of Illinois, 77 were brought by only eight plaintiffs, each represented by the same legal counsel.

Another chunk of litigation was filed by repeat plaintiffs Howard Cohan and Santiago Abreau, both represented by the firm of Jacobson and Tchernev, of Chicago. The two plaintiffs filed 21 and 16 lawsuits, respectively.

The trend didn’t appear to change in 2016. Through March 31, 29 ADA Title III suits were filed. Abreau was the plaintiff named in 11 suits; Cohan filed 10 suits; Mizerk, three; and Gomez, three.

To many business owners, those numbers substantiate their belief that some litigators are out to make money, banking that most defendants will settle quickly to avoid larger fees that would come with fighting the complaint.

Ivo Tchernev of the Law Offices of Jacobsen and Tchernev did not reply to repeated requests for comment.

However, Steele said he and his clients aren’t just after a quick buck, pointing out that plaintiffs can’t ask for damages, only injunctive relief.

“The goal of the ADA is not just to beat people up, because there are no damages, per se, but to get people caught up to 2016,” he said. “My clients - and I believe, in general, other clients who have brought cases similar to mine - they’re not looking to get rich off [these suits]. And they certainly do not get rich off it. They just want a business to extend the civil rights that they deserve.”

"If I have a client that [says], 'There's this building, they’re not in compliance because the ramp grade is a little bit too steep,' my general attitude is, this isn’t a game of ‘gotcha’ because of the rise-over-run elevation," said Steele.

Nonetheless, that is a main point of contention in the case filed against Fabcakes.

The lawsuit stated the ramp to Fabcakes was approximately 7 inches long and climbed approximately 3-4 inches between the sidewalk and the level of the front door.

"At the top of the ramp between the sidewalk and the front door, Mizerk would have had insufficient space to open the door and enter the restaurant, had she been able to climb the ramp," the complaint said.

Steele has come under fire in recent years after his former firm, Prenda Law - which he sold, he said – allegedly made millions by threatening to sue thousands of people suspected of illegally downloading pornographic movies.

Some see a correlation between the demand letters sent to the defendants in those cases and the letters businesses are receiving now, advising them to comply with ADA guidelines.

Steele said as an attorney now focusing on ADA litigation, it’s harder for people to mudsling, though they do try.

Steele maintains that many of his clients are young veterans who want to return to the same establishments they frequented before becoming injured in the line of duty.

“It’s been a real problem because these guys are going out and they’re finding out these fancy restaurants and bars - everything from hair cuttery places to whatever - are not complying with the Americans with Disabilities Act,” Steele said.

Because the courts cannot possibly go after every business that is not in compliance with the ADA, filing a discrimination lawsuit has become the only mechanism available to handicapped individuals, Steele said.

Still, defendants find many ADA lawsuits unpalatable, specifically when court filings openly list the plaintiff as a “tester” - someone who seeks out discriminatory public accommodations.

Steele said he doesn’t think there’s anything wrong with using a tester, though he asserted he doesn’t utilize such plaintiffs.

“I can’t think of a single instance where any of my clients have described a restaurant or establishment that isn’t in their neighborhood or they have gone to,” Steele said.

Indeed, the lawsuits filed by Mizerk against LaSalle Flowers and Fabcakes assert Mizerk lives within four city blocks of each establishment.

But representatives of neither business can recall ever seeing Mizerk enter the store. And Milovich said she believes Mizerk has no intention of purchasing flowers at LaSalle Flowers in the future.

Had the flower shop gone to trial, owner Margot Sersen could have used that argument to challenge the standing of Mizerk - one of the few arguments a defendant can make against an ADA complaint.

Even then, it often isn’t enough to dissuade a court from siding with the plaintiff, as a simple sentence of fact usually does the trick, said Bill Pokorny, a labor and employment partner at Franczek Radelet.

“If you read the complaints, [they say], ‘I actually went in; I was a customer at the restaurant,’ and that’s usually enough to give them standing,” he said.

Marca Bristo, CEO and president of Access Living, a group which advocates on behalf of those with disabilities, said her group is not opposed to testers, nor to lawsuits that result from such tactics. In fact, Access Living created a fair housing testing program to root out discrimination in the housing sector. And if the organization had the capacity to increase its scope of work to file suits under Title III, it would not rule out utilizing testers, she said.

“Do most disabled people go around [looking for noncompliant businesses]? No. We would be exhausted if we did that,” she said. “Should we? We probably really should.”