A Chicago concrete contractor has hit a local labor union with a lawsuit, claiming the union lied about the business during demonstrations and in fliers designed to protest the contractor’s work on the Apparel Center building in River North.

On April 14, Quality Restorations Inc. filed its complaint in Cook County Circuit Court, alleging the International Union of Bricklayers & Allied Craftworkers, Administrative District Council #1 of Illinois, defamed the construction company in fliers handed out to potentially thousands of people as part of a campaign against the business.

According to the complaint, Quality Restorations secured a contract to make unspecified repairs to the building, located at 350 N. Orleans, just north of the Chicago River and next to Merchandise Mart, in Chicago. 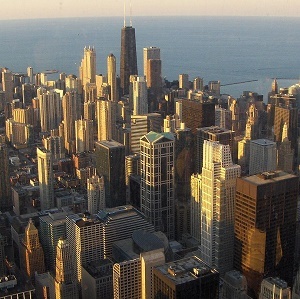 The complaint said the fliers delivered a litany of allegations against Quality Restorations, including that the company requires its workers to join a union, identified in the fliers as the “Independent Union of Amalgamated Workers Local 711.” The fliers said that particular union “negotiates sweetheart contracts that usually mean substandard wages and little or no benefits” for workers. Further, the fliers allegedly stated Local 711 was affiliated with “the Chicago Mob” through two men, identified in the court documents as James Bertino and John Matassa.

The fliers allegedly asked the owners of the building to stop working with Quality Restorations and “to stop doing business with a Mob union.”

It provided the contact information for a different contractor for the building’s owners to call, should they “think this work should be done by a contractor who works with real unions and whose employees receive proper wages and benefits.”

The complaint indicated the fliers represented an injury to Quality Restorations’ business because the company asserted the accusations contained in the fliers were false, and “building owners and the engineers that manage their construction projects and assist in hiring contractors are sensitive to the associations and reputations of the contractors they hire, and they seek to avoid public relations issues at their buildings and work sites.”

The contractor asked the court to order the IUBAC to pay unspecified damages, including punitive damages, to be determined at trial.

Quality Restorations’ website lists Bob Joyce as its founder, owner and president. The website says the company has been in business since 1984, and has worked on a number of high profile building projects in Chicago.

The company is represented in this defamation action by attorney Matthew A. Wlodarczyk, of Wlodarczyk Law LLC, of Arlington Heights.

Want to get notified whenever we write about Wlodarczyk Law LLC ?

Sign-up Next time we write about Wlodarczyk Law LLC, we'll email you a link to the story. You may edit your settings or unsubscribe at any time.