A group of more than five dozen Illinois social service agencies have sued Illinois Gov. Bruce Rauner and a collection of state agencies, alleging the governor’s decision to veto three appropriation bills in June 2015 has provided cover for the state to unconstitutionally refuse to pay them more than $100 million they are collectively owed for services rendered under contracts with the state of Illinois.

The plaintiff social service agencies are represented by attorneys with the firm of Despres, Schwartz & Geoghegan, of Chicago. 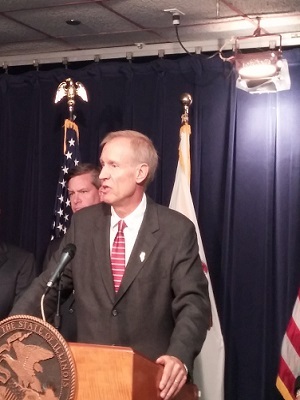 In a release announcing the lawsuit, the plaintiffs said they are merely asking the judge to order the state to pay them for work they have already performed, under the terms of contracts the agencies hold with the state government.

“This suit is about upholding a contract and paying your bills, basic good business practices,” said Pay Now Illinois’ Andrea Durbin. “We have delivered services under binding contracts, and now the state needs to pay us. We have delivered – and we continue to deliver – essential services to Illinois’ most vulnerable population of men, women and children as required under our contracts with the state. We are doing our part. We expect the state to do the same.”

The lawsuit centers on Rauner’s veto of three appropriations bills about 11 months ago, which would have provided funding to the social service providers under contracts issued by the state. The social service agencies said that veto should be considered unconstitutional because it interfered with the service agencies rights under the contract protection provisions of Illinois’ state constitution.

Essentially, the social service providers said the state violated the constitution by continuing to expect the social service agencies to provide their contracted services, even as the state agencies refused to pay them, or even submit their payment vouchers and invoices to the Illinois Comptroller’s office, using Rauner’s veto as justification.

“The Governor may not veto the appropriations for specific contracts – and impair the obligation ofr remedial legal scheme for such contracts – which he and other defendants intended to enter and hold in full force and effect,” the lawsuit said.

The lawsuit asked the court to issue an order declaring the veto unconstitutional and holding the appropriations legislation to be in effect, clearing the way for the social service agencies to get paid. They also asked the judge to issue injunctions requiring the state to pay them.

Without this relief, the social service providers said their organizations will suffer, and be forced to “lay off more staff and cut more programs in the coming months.”

The plaintiffs said they have not been paid by the state for more than 300 days.

Durbin, who is also chief executive officer of Illinois Collaboration on Youth, one of the lead plaintiffs in the lawsuit, said the state cannot be allowed to expect the agencies to provide contractually mandated services, without paying them what they are owed under those same contracts.

They can’t simultaneously have us enter into a contract and perform services and then say there isn’t money to pay for them,” Durbin said in the release. “The state has been having its cake and eating it, too.”