On Sept. 19, Chris Janes filed suit in Chicago federal court against Little League Baseball, demanding the Williamsport, Pa.-based youth sports organization pay him at least $75,000 for their alleged mistreatment of him in late 2014.

In August 2014, the youth baseball club known as Jackie Robinson West garnered glowing headlines and fame across the U.S., as the team, purportedly composed of African-Americans from Chicago’s South Side, stormed through the Little League World Series to capture the U.S. title and the right to play in the LLWS title game. 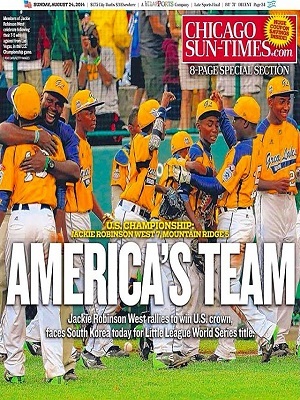 Following the LLWS, the JRW squad was celebrated in a number of public gatherings and ceremonies, including at Millennium Park and at the White House. Some of the celebrations, however, also honored individual players.

In his lawsuit, Janes said he first noticed a potential problem, during the LLWS, when one of the JRW players was honored in a suburban community as a “hometown hero.”

However, according to Little League rules, no players from the suburbs were allowed to play on the JRW team, Janes’ lawsuit said.

“As publicity increased, so did the number of suburban communities claiming that JRW players were from their areas,” the complaint said. “Plaintiff Janes believed that there was a reasonable basis to suspect that JRW violated the Little League rules on residency.”

According to the lawsuit, Janes then investigated the residency of JRW’s players and “discovered irregularities.”

Janes said he then publicly raised the issues with a local news reporter.

However, in response, Janes said Little League Baseball “decided to engage in an attempt to cover-up the cheating and harm” Janes, declaring in December 2014 his claims “had no merit.” Janes said he has since been subjected to “threats of violence, death and accusations of racism as a result of the publicity.”

Ultimately, Little League Baseball “in the face of mounting publicity that proved that Plaintiff Janes’ claims were valid,” found JRW had violated its rules, and the club had allegedly “falsified a boundary map to place players on their team ‘who did not qualify to play.’”

Janes said Little League Baseball “engaged in extreme and outrageous behavior when it engaged in a cover-up of JRW cheating and attempted to discredit the allegations,” the lawsuit said.

His complaint included two counts of infliction of emotional distress.

Janes is represented in the action by attorneys with the firm of Langone, Batson & Lavery, of Chicago.