The answer to the question of just how much extra Chicago area home sellers and buyers should pay for the peace of mind that comes from title insurance can vary from house to house and deal to deal.

But data indicates Chicago area residents are paying more for that particular product than most everyone else elsewhere in the nation – or even elsewhere in the state. And that is triggering debate over who is responsible, and how the rules can and should be rewritten to do something about it, with at least one legislative proposal aiming to substantially reform what has become a largely lawyer-driven process.

According to data supplied by Closing Corp., a provider of residential real estate closing cost data, Illinoisans on average paid 1.85 percent of their homes’ purchase price in closing costs, or about $5,800, including taxes. Among U.S. states and the District of Columbia, that figure ranks below only Pennsylvania, where home closing costs equaled 1.91 of a home’s worth. 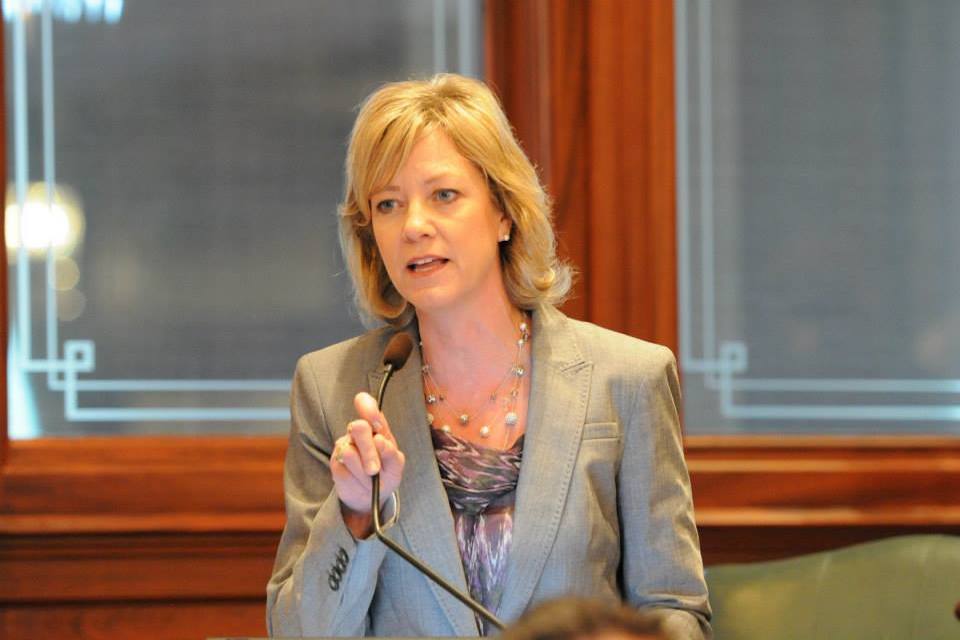 And a large portion of that total comes from title insurance, Closing Corp. reports. Statewide, average title insurance premiums, which are sold to both the seller and buyer, equaled about 42 percent of total closing costs, and equated to nearly 1 percent of a home’s value.

And the differences between 0.6 percent and 1 percent can cost home sellers and buyers thousands on paper, and significantly more over time if the costs are rolled into a 30-year mortgage.

The question of what and who is to blame for the perceived discrepancy has now begun to prompt calls for action in Springfield and elsewhere.

For generations, Illinoisans and others throughout U.S. have purchased title insurance policies when buying or selling a home. The policies are designed to protect either party, or the mortgage lender financing the purchase, from so-called “defects” in the title, which could torpedo a sale or present legal quandaries later, should they arise. The policies are good for as long as a policyholder owns the property.

And through the decades, lawyers who take leading roles in the shepherding real estate transactions, have also come to serve increasingly as title insurance agents, earning fees as attorneys and commissions from the title insurance policy sales, particularly in the Chicago region, where so-called industry customs place lawyers at the center of the real estate sale process.

Known as HB5935, the legislation specifically would amend the Illinois Title Insurance Act, empowering the Illinois Department of Financial and Professional Regulation to discipline title insurance agents who serve as both an agent and an attorney in the same real estate transaction.

As Ives and other supporters of the legislation see it, the bill would force lawyers who also sell title insurance policies to choose whether they are acting as an attorney representing a home seller or buyer, or as a title insurance seller.

“My point in filing the bill is to get full disclosure for those buying and selling homes to know what title insurance costs, their rights to buy it from whoever they want and force attorneys out of being on both sides of a deal in selling title insurance that is supposed to be the ultimate protection of a clear title,” Ives said in an email.

She said attorneys earn “four times” as much from selling title insurance as they do from the fees they charge their clients.

“Lawyers… are an easy scapegoat”

The legislative proposal, however, has caught the ire of real estate lawyers throughout the state, who have warned the measure would fundamentally alter their industry, and force many of them out of business, while unfairly blaming them for the sins of other bad actors in the real estate sale process.

Last year, the Illinois Supreme Court deadlocked on the question of whether fees paid by title insurance companies to real estate attorneys in exchange for client referrals amounted to illegal kickbacks.

And this year, the IDFPR ended up in court when it sought to require real estate attorneys working as title insurance agents to estimate the fees they might earn from selling title insurance. ATG sued the state over the proposed rules, arguing the IDFPR overstepped its bounds, as the state agency lacks the authority to regulate lawyers.

And amid those regulation attempts, Ill. Gov. Bruce Rauner vetoed a bill, known as SB65, which would have placed large obstacles in most of the Chicago metropolitan area to the practice of bifurcation of title services.

Earlier versions of SB 65 would have limited bifurcation statewide. The bill was amended to apply only to counties with populations of more than 500,000. In Illinois, only Cook County and the suburban counties of Lake, DuPage, Kane and Will have populations that size.

The bill was opposed by many non-attorneys involved in title insurance, including Trish Cooke, who formerly served as a title insurance regulator in IDFPR and now owns a title company in west suburban Lisle. Cooke questioned whether the legislation would conflict with the federal Real Estate Settlement Procedures Act, which guarantees Americans the right to shop around for title insurance.

Proponents of the bill, including the Chicago-based Professional National Title Network Inc., an organization which seeks to protect and promote “lawyer delivered title services,” disagreed, saying the bill would still fit RESPA, as it would still enable homebuyers to purchase title insurance on their own if the seller agrees, or if the buyer can demonstrate a cost-savings from doing so.

While the fate of the bill remains undecided, the process stirred debate over which approach benefits consumers more.

On one hand, Cooke pointed to data, such as that supplied by Closing Corp., which she said shows homebuyers and sellers in the Chicago area presently pay thousands more for title insurance than similarly situated consumers in other parts of the state.

For buyers, she said, this can translate into tens of thousands of additional buyers over the life of a typical 30-year mortgage.

As Cooke sees it, this practice is a large reason why real estate closing costs in the Chicago area are significantly higher than in the rest of the state and the rest of the country, and why title insurance rates continue to creep higher.

She said it places attorneys in the position of being encouraged to “not act in the best interests of their clients.”

“There are many out there doing their clients and their profession a huge disservice, wearing two hats in the same transactions,” Cooke said.

Advocates of real estate attorneys, however, say Cooke’s take is wrong. They said attorney control of the real estate sale process actually saves consumers money, while moving the closing process along more quickly, with greater protection for sellers and buyers.

In materials released to the Cook County Record, PNTN, for instance, argued attorney involvement shields sellers and buyers from “junk add-on fees” and other costs tacked on by title insurance companies, especially those from out of state who they asserted are most interested in protecting the interests of lenders, and not consumers.

PNTN further noted allowing attorneys to act as title insurance agents can also reduce costs by securing discounts for consumers from underwriters, eager to sell policies to both parties in a transaction. Such attorney control also can speed the closing process along by reducing the possibility for potential conflicts over the state of the title and liability for any title defects.

Further, PNTN asserted separating attorneys from the title insurance process could cause consumers to pay more, as both attorneys and title insurers raise their rates in response to changes in the marketplace.

However, the ability to verify either claim is difficult, as precise comparisons of title insurance rate is difficult, both within Illinois and from state to state.

Frank Pellegrini, an attorney and owner of Prairie Title Services in Oak Park, who previously also served as president of the American Land Title Association, conceded title insurance costs may be lower elsewhere in Illinois. But he ascribed these differences to relatively lower real estate values downstate, and to significant differences in housing stock and real estate in the differing parts of Illinois.

Interstate comparisons are even more difficult, as regulations and property values vary widely from state to state.

The raw closing costs paid by Illinois homeowners paled in comparison to the total dollars paid on average in places like California, New York and D.C., where consumers paid $7,500, $15,200 and $20,200, respectively, in total closing costs.

That means in those other regions, home buyers would pay closing costs equivalent to 0.8 percent to 1.3 percent of their home purchase price, well below the 1.85 percent Closing Corp. estimated Illinoisans pay.

That is why Cooke said she is working with Ives on HB5935 to enact rules requiring attorneys to wall off their roles in real estate transactions, a change she believes will help bring Illinois' closing costs more in line with th national average.

“They need to choose which hat they’re going to wear in a transaction,” Cooke said.

To date, the legislation has garnered no other sponsors in the Illinois state House. But the proposal nonetheless has drawn fire from real estate attorneys and their advocates across the state.

“Race to the bottom”

In a post on the organization’s website in early August, Attorneys Title Guaranty Trust President and CEO Peter J. Birnbaum conceded the title insurance “market needs an awakening.” He noted the industry in Illinois currently is grappling with what he called a “race to the bottom” in “market conduct,” particularly from “improper steering or reciprocal trading by some real estate professionals, junk fees, or duplicative costs.”

But he insisted the solution should come from within the industry or from regulation, not from Ives’ proposed law, which he said unfairly scapegoats real estate lawyers.

“’Physician heal thyself,’ is certainly the best remedy for what ails the marketplace,” ATG wrote. “In the absence of self-correcting behavior, the market needs some form of rational intervention by regulators.

“But to lay blame on the hard-working and well-intentioned legal profession is not the cure.”

Pellegrini also said he would oppose HB5935, saying he believed the legislation would make it more difficult for homesellers and buyers to “get the strong benefit” of the work of real estate lawyers, who he said are often “best equipped” to assist consumers in working through the potential pitfalls of the title review process.

“It would be better to look for instances of inappropriate conduct and address that, rather than a blanket prohibition,” he said.

Cooke and Ives said the bill will be amended to also empower the IDFPR to similarly discipline real estate agents, brokers, loan officers and other professionals.

And even if the bill never becomes law, Cooke said the proposal has sparked “discussion.”

“And I hope it will be a productive conversation on a topic that is so important for the industry,” she said.