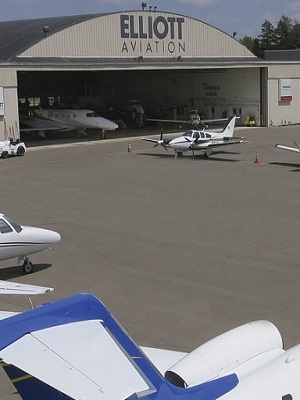 An Illinois appellate panel has grounded a state law delivering a special tax break to a Moline aviation service, awarded because lawmakers feared the service otherwise might take flight across the Mississippi River to Iowa, where property taxes would not apply.

Former Ill. Gov. Pat Quinn signed into law on Feb. 1, 2013 a bill exempting from taxes the property leased by Elliott Aviation from the Metropolitan Airport Authority of Rock Island County in Moline. The law termed Elliott Aviation a “fixed based operator” and provided that any fixed based operators, who furnish aeronautical services to the public on property leased from the Metropolitan Airport Authority – which is tax exempt – would also be exempt.

The purpose of the law was to encourage Elliott Aviation to expand in Illinois, rather than Nebraska, Missouri or especially in Iowa, all three states in which fixed based operators do not pay property taxes.

On March 27, 2013, the Moline School District 40 Board of Education went to Rock Island County Circuit Court, seeking a permanent injunction against the tax exemption law and claiming the law violated the Illinois Constitution by creating “special legislation” to benefit a person or group to the exclusion of others similarly situated. The school district stood to lose $150,000 per year in tax revenue, because of the law.

Elliott Aviation countered the law was on the level because special legislation can be enacted in line with the state constitution for properties “uniquely situated.” Elliott pointed out its Moline location was right next door to Iowa, and argued, without the Illinois tax incentive, they might move to Iowa, depriving Illinois of jobs and economic development. Given that most Illinois businesses are not along the state border, Elliott was unique, they argued.

In December 2013, Circuit Judge Frank R. Fuhr shot down the school district’s case. The school district then steered a course to Third District Appellate Court in Ottawa, where it found friendlier skies in an opinion issued July 15.

Appellate justices noted there are 20 other airport authorities in Illinois, but the exemption law singled out for favor Elliott Aviation and any future similar aviation businesses that lease property from the Metropolitan Airport Authority, making them “richer,” with no requirement they create Illinois jobs. At the same time, other similar businesses enjoy no such tax exemption.

Going further, any business in Illinois could claim it was uniquely situated, vis-a-vis businesses in other states not requiring property taxes for leaseholders, qualifying them for a special tax break. In line with such reasoning, air services at the Moline airport do not appear so unique, the Third District justices said.

Appellate justices further noted the $150,000 revenue loss to the Moline School District could force that district to cut school jobs, meaning the tax exemption, instead of creating jobs, could put people in the unemployment line.

“It is certainly laudable for the state to seek out economic benefits and employment opportunities for its citizens, but our constitution prohibits its attempt at doing so in Public Act 97-1161 (the tax exemption law),” the justices wrote.

Appellate justices sent the case back to Rock Island County Circuit Court, with instructions to Judge Fuhr to address the school district’s motion for injunction.