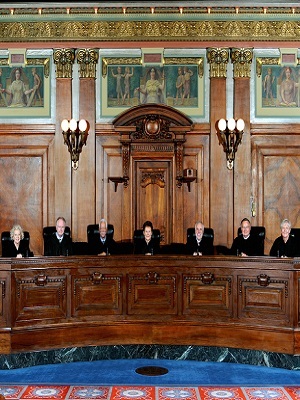 The Supreme Court of Illinois has determined a Rosemont-based engineering firm had a right to file a mechanics lien for unpaid services, contrary to the findings of lower courts, because its work was done with the intent of improving a tract of land downstate.

Now, the only question remaining concerning their ability to slap on the lien focuses on whether the property owner actually approved the initial work.

The case began in spring 2008, when Carol and Glen Harkins were looking to buy property owned by Carol Schenck in Peoria County. To this end, the Harkins hired Christopher B. Burke Engineering to survey the vacant land, draft and record a subdivision plat, plan roads and lay out infrastructure. Burke is based in Rosemont, with offices in New Lenox, Morris and Peoria.

The Harkins followed through and bought the property in August 2008 for $550,000, with Burke continuing to work for them for several months afterward. By February 2009, one house had been built on the land – christened Crest Ridge Estates – but the Harkins abandoned further development of the property, because of the deteriorating economy.

Burke then submitted a bill for $109,549, but allegedly was not paid and filed a mechanics lien on the property. They followed with a lawsuit in October 2009 in Peoria County Circuit Court to foreclose on the lien. Heritage Bank of Central Illinois was a party to the case, because it had a mortgage on the real estate.

Circuit Judge Michael Brandt dismissed the suit in December 2013, saying his reading of the Mechanics Lien Act required that for Burke to have the right to a lien, the service Burke provided would have had to improve the property and been “induced,” “encouraged” or otherwise permitted by the property owner – Schenck – at the time Burke began rendering that service.

Burke appealed to the Third District Appellate Court in Ottawa, but the appellate panel, by a 2-1 margin in January 2015, affirmed the lower court’s decision that Burke’s services did not physically improve the property or increase its value. In a dissenting opinion, Justice Tom M. Lytton acknowledged the Lien Act requires an improvement, but pointed out the Act also allows a lien if professional services are done for the “purpose of improving the property” – clearly the case for Burke, according to Lytton.

Burke appealed to the state high court, and justices agreed with Lytton, saying Burke’s engineering work led to an improvement of the property, as demonstrated by the fact a house was built on it.

“If a physical improvement is required in order for an engineer to secure a lien for their work, then these professionals would be subject to the whims of the parties with whom they contract, who may decide to complete the project or not. Such an outcome is contrary to the protective purpose of the Act,” Garman wrote.

Heritage Bank also based an argument on the 1937 amendment to the 1903 Lien Act that changed a semicolon to a comma. The bank maintained the change indicated professionals, such as architects and engineers, only have recourse to mechanics liens, if their work was for "raising, lowering, or removing a house or building."

The high court said it did not know why the Illinois Legislature dropped the semicolon for a comma, but nonetheless, lawmakers’ actions since have shown a desire to make mechanics liens more available, justices said. The court asserted Heritage’s argument is also illogical, because several of the professionals listed in the amendment as having a right to a lien, such as surveyors, do not participate in “raising” or “lowering” structures.

Having settled the question in the affirmative that Burke’s work improved the property, the Supreme Court next addressed the second half of the equation in the case: Did Schenck permit Burke to enter into a contract for engineering services with the Harkins? Specifically, was Schenck in the dark as to the details of the Burke-Harkins contract, as contended by Heritage Bank?

“This is a far more compelling argument,” Garman wrote.

Dean R. Essig, of Washington, Ill., is defending the Harkins, and the central Illinois firm of Quinn Johnston, with offices in Peoria and Springfield, is representing Heritage Bank.