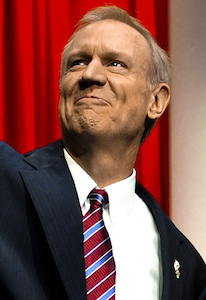 The General Assembly can grant him, the state’s chief executive, the authority to make the cuts that will allow Illinois to spend what it’s bringing in, about $32.8 billion

Or, Rauner said, lawmakers can agree to some of what he considers essential economic and political reforms and he’ll work with them on a combination of revenue increases and spending reductions for a total budget of about $36.3 billion.

The governor also asked lawmakers to promptly send through legislation to fund primary and secondary education for fiscal year 2017 at $393 million, up $75 million and the highest amount in state history.

Democratic leaders largely answered the governor was bringing nothing new to the table to address the overall budget quagmire, which includes the state still spending billions in the red even without a budget more than seven months into fiscal 2016.

In short, if not engaged in outright battles, the warring factions in Springfield appeared to remain at least dug into their trenches.

“Democrats won’t support enough spending cuts to live within our current revenues, and you won’t vote to raise taxes to cover your deficit spending unless Republicans agree to support your tax hike,” Rauner said in his speech.

“I won’t support new revenue unless we have major structural reforms to grow more jobs and get more value for taxpayers. I’m insisting that we attack the root causes of our dismal economic performance. Those are the dynamics, he said.

“That leaves us with only two choices: either you give the executive branch the authority to cut spending to live within our revenues. Or, we agree, together, on economic and governmental reforms, to accompany a negotiated balance of spending reductions and revenue, which ensures that Illinois can be both compassionate and competitive.

Democrats said there was, at core, some nice language about working together in the governor’s speech but no real changes in position.

“The governor can be a vital ally in resolving what’s become the defining crisis of our time,” Cullerton said in statement. “But reform won’t come by simply throwing more money at the existing system. We need a complete overhaul.”

With “all due respect to the governor, his budget speeches don’t help Illinois,” Cullerton said. “At this point, the courts are running more of the state than our governor. It’s going to require real plans and real action on his part to resolve the impasse he created. I want to work with him to find practical solutions to our problems because nothing Gov. Rauner did in his first year worked for anyone.”

Democratic Speaker of the House Michael Madigan of Chicago continued to criticize the second-year governor and his agenda.

Addressing a question on whether there isn’t room for negotiation with Rauner, Madigan said, “The answer is that’s possible where people are being reasonable, where their focus is on the budget deficit problem and not some extreme right agenda which is based in extreme right economic theory that thinks the government ought to be used to drive down the standard of living.”

Said Cullerton in his own news conference, “The speaker and I have been consistent. We are willing to talk to him about cuts, revenues or a combination thereof. He doesn’t seem to be focused on doing that. Instead he’s asking for a ‘turnaround agenda’ that really has nothing to do with the state budget.”

Rauner said “nothing could be further from the truth” than the argument his agenda is disconnected from the budget.

“Workers’ compensation reform and lawsuit reform. Mandate relief, consolidation, local control of bargaining and bidding to drive down property taxes. These reforms will provide many billions of dollars every year in government cost savings,” Rauner said.

Illinois began fiscal year 2016 last June 1 without a budget and still remains without one.

Without an overall budget for this fiscal year, the state is still making payments on roughly 90 percent of the bills by paying for costs mandated in continuing appropriations, by court decrees, in the primary/secondary education budget that did pass and for its debt service.

And that spending does not include funding for higher education or most social services.

Illinois also is sitting on about $7 billion in unpaid bills, and that amount will grow to $10 billion to $12 billion by June 30, the end of fiscal year 2016 if action isn’t taken, state Comptroller Leslie Munger, R-Lincolnshire, recently said.

While the impasse in Springfield didn’t seem to change much Wednesday, the governor said he’s willing to talk.

“I stand ready to negotiate with each and every one of you – 24 hours a day, 7 days a week,” Rauner told lawmakers.

Rep. Jack Franks, a Woodstock Democrat who takes pride in opposing tax increases, said the governor needs to be more specific on some of his proposals but added, “I’m happy to work with him, though. I think he was being very pragmatic. I don’t think he was being overly confrontational, I think he was just laying it out as he saw it.

Franks also argued for action, by Democrats and Republicans, now.

“What I would ask the governor to do now … he ought to be locking us down here in Springfield, and not letting us leave that chamber until we come away with a budget, because every day that we’re not here, the citizens of Illinois are spending $33 million more a day than we are bringing in.”

Sen. John Sullivan, D-Rushville, also gave Rauner points for being less divisive than in some of his past speeches.

“He still made his points, but I thought the overall tone was just more amenable … so I appreciated that.”

Sullivan said he thinks there’s reachable middle ground on some of the governor’s agenda items, such as workers compensation, although he expressed doubt that Democrats would yield on diminished collective bargaining for public employees.

”I have Western (Illinois University), I have six community colleges in my Senate district, and I have three private (institutions), and the privates are affected because of MAP (the Monetary Award Program). … So, I am very very much concerned about higher education and how it would be affected by a budget that is given to the governor to spend as he deems fit.”

“We’ve got to be bold about these structural reforms,” he said.

“It’s going to take some tough decisions made now to right this ship,” McCarter said. “I just hope there's enough legislators to stand up for what’s right and not just give in to the special interests that have guided us down the wrong path.”

Todd Maisch, president and CEO of the Illinois Chamber of Commerce, endorsed Rauner’s calls for change.

“We simply cannot allow state government to be treated like an endless supply of blank checks,” Maisch said. “I said last year that the check has come due. Our situation is one year worse now. Structural changes, even a couple of them, will help grow our economy and bring in more revenue, and that must be a reality this year.”