CHICAGO — A federal judge has allowed a former Cook County correctional officer to continue his suit accusing Cook County Sheriff Tom Dart of firing him in retaliation for supporting a political opponent of the sheriff. The judge, however, dismissed a number of other defendants within the sheriff's office from the case.

"In a nutshell, the IWA imposes liability only on a person's 'employer,' and as individuals these defendants were not Michno's 'employer,'" Kennelly said in his four-page memorandum opinion and order. 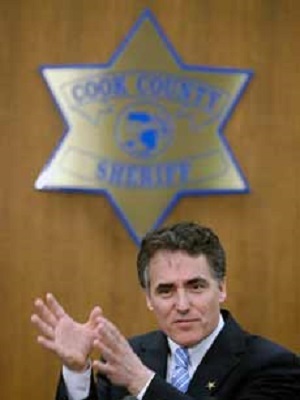 Kennelly, however, denied the defense's motion to dismiss the case in its entirety, according to the memorandum opinion and order.

In October 2011, the Cook County Sheriff's Department Merit Board ruled Michno should be terminated. The ruling followed "two specific charges" alleging Michno failed to return to work and failed to report to the medical unit when a medical leave of absence expired in 2009.

Michno, however, is not the only former County Sheriff employee to accuse Dart, a Democrat, of inappropriate termination. Dart has been Cook County Sheriff since 2006, and is up for re-election in the March 20 primary election against challengers Edward Acevedo and John Fairman.

This past May, former Cook County correctional officer Joseph Acevedo, who lost his job in January 2015, asked the Cook County Circuit Court to reverse his firing and the termination of others. In December, the department's personnel board froze all firings and suspensions, according to a report published by the Chicago Tribune.

In April 2014, a case filed by Michno was one of two filed by former Cook County correctional officers that a U.S. District Court judge allowed to move forward alleging Dart allowed supervisors to make up disciplinary cases to justify terminating political opponents.

The defendants in Michno's present case argued for dismissal because Michno allegedly failed to sufficiently argue that Dart and Undersheriff Zelda Whittier were liable, according to Kennelly's memorandum opinion and order.

Dart and the sheriff's office defendants are represented by attorneys Jeffrey James Scolaro, Laura S. Platt and Tyler Eason Roland, of the firm of Daley Mohan Groble P.C., of Chicago, and Colleen B. Cavanaugh, of the firm of O'Rourke, Hogan, Fowler & Dwyer LLC, of Chicago.