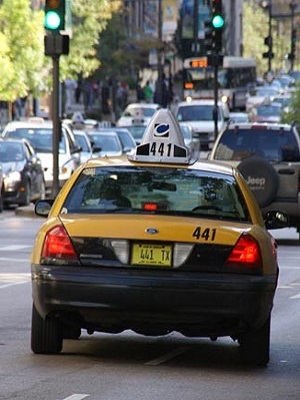 Cab drivers in the city of Chicago have long claimed City Hall’s treatment of ride-sharing services like Uber and Lyft, compared to how it treats the city’s taxi drivers, is unfair.

Now, Chicago’s cabbies will have the chance to press that claim in court, after a federal judge said a lawsuit brought by taxi drivers asserting the city has more harshly regulated taxi drivers, while letting ride-sharing service providers off easy, potentially violating constitutional guarantees of equal protection under the law, may have some gas left in the tank.

On Sept. 22, U.S. District Judge Sharon Johnson Coleman rejected the city of Chicago’s motion to dismiss the entirety of a lawsuit brought by the Illinois Transportation Trade Association – a political advocacy group representing Chicago’s taxi drivers – and a number of holders of Chicago taxi medallions.

The lawsuit centers on an ordinance adopted by the city in 2014 to regulate the ride-sharing services, legally known as “transportation network providers.” Taxi drivers said the ordinance subjects the TNP drivers and the companies with which they are affiliated to a much lesser standard than the city applies to taxi drivers.

The taxi drivers note the city requires them to each purchase and maintain a taxi license, known as a medallion. Because the city limits the number of medallions available, the medallions can often take on inflated values. The court documents note the medallions recently have sold at auction for at least $360,000 or more.

Taxi drivers must also pay the city $1,200 annually, and taxi affiliations must pay $500 each year, plus $15 for each affiliated medallion.

And taxi drivers must also undergo required background checks and drug screenings administered by the city, and submit their vehicles to city inspections, among other “onerous” requirements.

By contrast, the TNPs need only pay the city $10,000 annually, no matter how many vehicles it puts on city streets; are required to carry less insurance; and are not subject to city-administered background checks, drug screenings or vehicle inspections, among other differences.

In the lawsuit filed in February 2014, the taxi drivers asserted the differences in the city’s regulations, which they allege make it easier to operate a TNP than a cab service, drive down the value of their medallions, amounting to an unconstitutional taking of the taxi drivers’ property and a breach of contract, as well as an equal protection violation.

Coleman dismissed the cab drivers’ takings and breach of contract claims, agreeing with the city’s assertions the city’s ordinance governing taxis did not create a guaranteed value for the medallions, nor a guarantee the taxi drivers would not ever face competition from other transportation services, like Uber and Lyft.

However, Coleman said the taxi drivers have a much clearer legal road ahead when pressing their allegations the dueling ordinances create an environment in which the city, without legal justification, regulates the TNPs differently from cab services.

“The City regulates taxis and (ride-sharing services) differently in the following areas, among others: background checks, drug tests, vehicle age, maintenance and inspection, insurance, annual fees, and unregulated fares,” Coleman said. “In all these areas the requirements for taxis are far more onerous than for TNPs.”

While taxi drivers would still need to prove their case in later proceedings, Coleman said, for now, the city has not demonstrated any “material differences justifying disparate treatment of taxis and TNPs,” as “each provides for-hire transportation within the city of Chicago, rides can be pre-arranged for a set time, hailed, or virtually-hailed through an app, consumers are contractually bound to pay for the services and may do so by credit card.”

“This Court fails to see how any of the purported differences relate to the stated rationale such that it justifies maintaining substantially heavier burdens on taxis for training, qualifications, drug testing, vehicle condition, insurance, and fees,” Coleman wrote in her opinion. “Both the purported differences between taxis and TNPs and their relationship to the stated rational appear utterly arbitrary to this Court.”

The taxi drivers and the Illinois Transportation Trade Association is represented in the action by attorneys with the firm of Miller Shakman & Beem, of Chicago.

The city is represented by its in-house lawyers in the City of Chicago Department of Law.